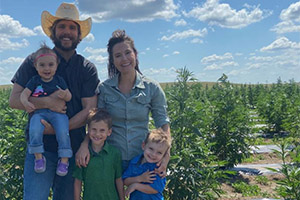 Cathy Weber met Healthy Oilseeds owner, Roger, at a hemp meeting in Dickinson last fall and her husband, Shane, made his acquaintance soon after at a hemp conference in Bismarck last winter. Cathy and Shane both spent some time in the oil field industry before moving on to a new and anticipated market recently; growing CBD hemp. Cathy’s brother, Andy, casually mentioned this idea at a family gathering last summer and it peaked Shane’s interest enough to ask question after question sharing that he had land available and is always looking for new sources of income and thought it would be very interesting. After meeting at the hemp conference, they reached out to Roger about buying seeds from Healthy Oilseeds and he said he would be happy to sell now keeping in contact ever since.
Growing hemp for CBD can be very hard work, both physically and mentally. Shane shared that this year, after he was furloughed due to COVID-19 taking off, they decided to double their original 1 acre of CBD hemp to 2 acres. They built a greenhouse, put in an irrigation system, and much more while referring to Roger and Andy nearly every day with questions on how to proceed. They are now in the process of getting certified organic which Shane shared is not an easy task!
Shane and Cathy shared that the most rewarding thing about what they do is the fact that they get to be their own bosses. After working for someone else for a long time, it’s been a nice change for them to get to be home with their family while working on the farm. “Hopefully we make some money too, but that would be ALMOST as rewarding as the family part,” shared Shane.

Thankfully these two have each other. When one of them gets down about losing a plant or a storm rolling through, they are able to bring the other up with encouragement and optimism. Shane loves a challenge, but couldn’t have done it without the support of his wife, mother, and mother in law as well as the knowledge and advice from Roger and Andy.

We use cookies on our website to give you the most relevant experience by remembering your preferences and repeat visits. By clicking “Accept”, you consent to the use of ALL the cookies.
Cookie settingsACCEPT
Manage consent

This website uses cookies to improve your experience while you navigate through the website. Out of these, the cookies that are categorized as necessary are stored on your browser as they are essential for the working of basic functionalities of the website. We also use third-party cookies that help us analyze and understand how you use this website. These cookies will be stored in your browser only with your consent. You also have the option to opt-out of these cookies. But opting out of some of these cookies may affect your browsing experience.
Necessary Always Enabled

Performance cookies are used to understand and analyze the key performance indexes of the website which helps in delivering a better user experience for the visitors.

Analytical cookies are used to understand how visitors interact with the website. These cookies help provide information on metrics the number of visitors, bounce rate, traffic source, etc.

Advertisement cookies are used to provide visitors with relevant ads and marketing campaigns. These cookies track visitors across websites and collect information to provide customized ads.

Other uncategorized cookies are those that are being analyzed and have not been classified into a category as yet.